Black's Creek has been wonderful so far! The kids continue to be amazed at the wonders of marine habitats. They spend a lot of their time at a little beach where they scour the water for any signs of animals that they can catch. It seems to be pretty hit-or-miss, as one day they'll catch dozens of critters while the next they're lucky to find any. Just yesterday we caught our first fish, which added to the overall sense of excitement that can be found at Black's Creek. They couldn't believe that the "minnow" was so big! 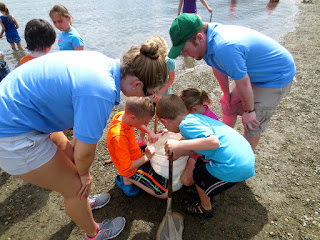 We've also had a lot of luck with bird-watching, as we've seen multiple different types fly over our heads. We were even lucky enough to see one dive down to feed, which the kids loved. Carolyn did her best to explain how to differentiate the birds as best she could, but I'm pretty hopeless when it comes to stuff like that. The kids aren't though, and some even knew the differences already.

The latter half of the day is usually wrapped up with three activities. There's usually a tag game, which today was toilet tag, a game that none of the counselors had ever heard of. It's basically freeze tag, but if you're frozen you need to take a knee and hold your arm out at a 90 degree angle and someone has to "flush" you by pushing your arm down. For those that don't want to play tag, we use a marine life guidebook to inspire kids to draw their own sea creatures, or they could always play either kickball or taps, which is decided by the remaining kids. 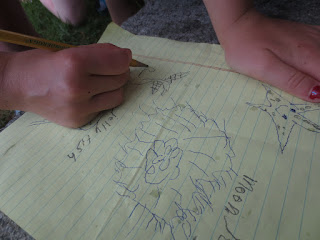