Hey guys today at the museum our day was full of unique surprises. We came across what I believe to be a purple shore crab. However it's natural habitat is off of the coast of California. After speaking with some others they believed that it was likely that it was another species of crab that was very similar to the purple shore crab. However I am not convinced. After a while of looking and just observing him and even comparing every distinct physical feature to our field guide, he matched only one species and that was the purple shore crab. I personally believe it is highly likely that he was brought over here just like the green crabs were, on boats. Seen as we are an active dock I think it is very likely that the little guy could've hitched a ride on someone's boat or he may have even been purposely taken and then he escaped. Once I got home I googled them as much as I could, but sadly there isn't much documented about them. If seeing a Pacific crab in the Atlantic isn't odd enough for you. When we first took him out of the trap we didn't notice his different characteristics, but we noticed that he had a tumor like bubble in his pincer. After further investigation I have come to the conclusion that it is the ligament that holds the pincer together, filled with excess water that should be there. He wasn't the only crab to attract our 100 guests but he had 112 other crab friends that intrigued the crowd as well as 2 jellyfish. 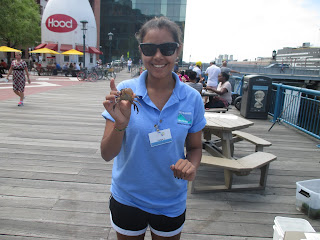 Today we broke the record for the amount of guests and crabs !!! Though today was amazing in many ways, it was also heart wrenching. We began to see some scuba divers testing the water and we learned that there had been an oil spill. At first it seemed harmless because we hadn't seen any oil in the water. However while pulling up the crab traps, we found them covered in oil. Though tragic, it was a learning experience to see how much a little bit of oil can hurt the wild life. Overall today was full of fun, excitement and tons of surprising learning experiences and I am so glad to be working with Save the Harbor Save the Bay, and I can't wait to see what the rest of the summer brings. Until next time. 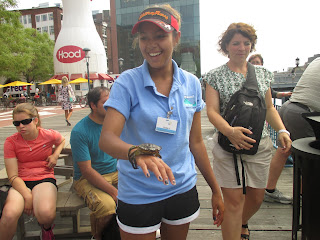