George's Island: Where the Fish Look You in the Eye

Hello Save the Harbor Save the Bay followers.  Here is a recap of the first two days of fishing with the All Access Boston Harbor crew on Georges Island:

Day 1:  It was an overcast morning as the P-Town II made its way out past Deer Island and towards George's where the AABH crew had high hopes for landing some fish. 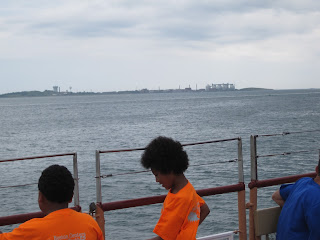 How big were the fish we were going to catch? 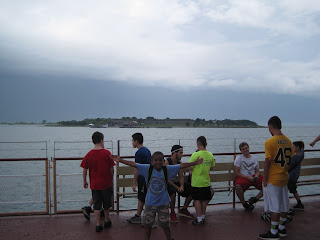 This big!  As this enthusiastic young angler let us know.

As the day warmed up, so did the interest on the dock.  Over forty visitors tried their luck off of the pier. 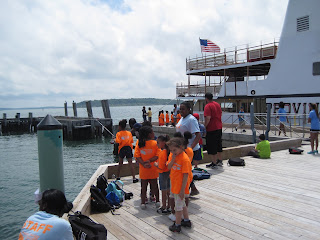 Everyone enjoyed their experience.  Several counselors made a point of thanking us and reminding us that fishing is about patience and that if they were not bound by their schedules, they were sure that their campers would have kept going at until dusk.  But alas, still no fish.

Day 2:  Despite forecasts of thunderstorms for the afternoon, a hearty crew of campers joined AABH on our way back to George's. 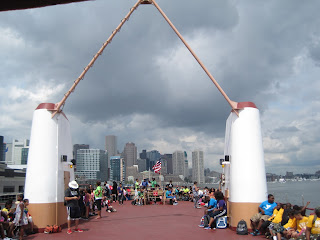 Here is where things got exciting.  After setting up our rigs on the pier, I took a turn at casting a squid strip into the harbor.  Jigging my bit of squid back to me in counts of three, (1 pull on the line, 2 pulls, 3 pulls, reel) I spotted my line's sinker emerging from the water followed by the soft white strip of squid and then BOOM!  A flounder hit the bait!  I let the flounder swallow it then I set the hook.  But I must have done so too well, for as the flounder approached the surface of the water it swam once to the left, then once to the right, pulling the tip of my rod down towards the ocean - and with an arrogance befitting the cleaver pisces, the fish paused right below my feet.  Looking down I could see the flounder examine me with both of its eyes mounted on one side of its flat body.  Just as I was about to land it - and I swear this to be true - the flounder winked at me, turned its head to the side as if to say "Not today buddy!" And then snapped its whole body out sea making off with my hook still lodged in its mouth, leaving my hookless bottom rig dangling in its wake.

So I lost the fish - and my hook.  But that didn't keep us from trying to get it back.  Again the afternoon saw many anglers lined up to experience the thrill of fishing. 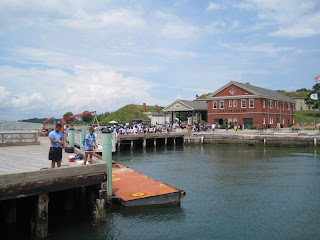 And again we were forced to make our way back to Boston empty handed.  But I've got news for you fishes: The AABH crew and our campers will not be discouraged.  And as Senior Harbor Educator Lindsay's persistence demonstrates, we fish until we are forced off the pier - and sooner or later we're going to get you.  And this time, it's personal! 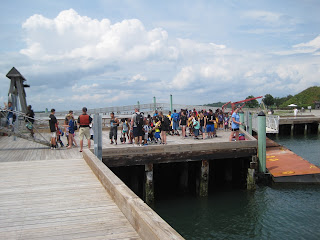