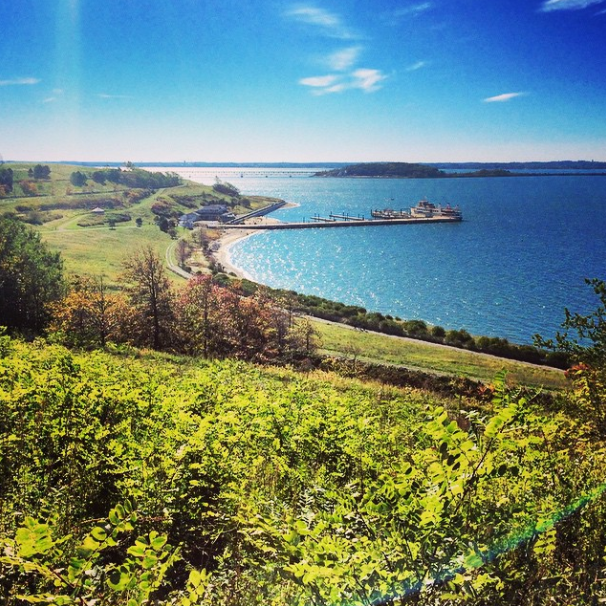 Spectacle Island is a 105-acre island in Boston Harbor located just 4 miles offshore of downtown Boston. The island has a colorful history, and today is a public park which provides:
Visitor Center and Exhibits
Sea Glass Café (open seven days a week)
Drinking water
Restrooms
Changing rooms
Rinse showers
Venue for catered events
Marina with day and overnight slips
Lifeguarded swimming beach
Five miles of walking trails
During the Summer, Spectacle Island is one of the sites used for Save the Harbor's All Access Boston Harbor program, as well as a frequent destination for our fall and spring day trips.
﻿﻿﻿


Long before Spectacle Island became one of the most visited Harbor Islands, the island was not a popular destination.  For almost 1,000 years, Native Americans used it as a dumping ground for clam shells and fish bones. After the Pilgrims settled the area, the island was used as a quarantine hospital for smallpox victims, and later as a glue factory.  In 1847, two hotels were built on the island, but ten years later were shut down for gambling and other illegal activities.  It wasn't until the 1920's that the city of Boston began using the island as a landfill.

Up until 1959, trash was continuously dumped onto the island.  The trash piled up so high, that the once primarily flat island was now one of the tallest in the harbor.  After the landfill was shut down, the island of trash remained there undisturbed for many years, slowly polluting the harbor.
Fun Fact: It was said that on foggy days, fishermen could tell their location in the harbor by the strength of the smell of Spectacle Island.

In the 1990's, construction on the Big Dig had begun, creating the need to find a place to dispose of the 3.5 million cubic yards of excavated dirt, gravel and clay.  Construction began in 1993, to transform Spectacle Island from a dump into a beautiful state park.  During this process, the trash was burned, and the island covered with dirt and top soil.  Workers then planted 2,400 trees and 26,000 shrubs.  The island joined the national parks system in 1996 and officially opened for visitors in 2006.

Although Spectacle has been completely reconstructed into a beautiful state park, and it's past seems all but erased, you can still find some remains from its days as a landfill.  Pieces of old glass bottles and ceramics can still be found on the beaches.  No need to worry about cutting your feet though, these pieces have been transformed by the ocean and time, making them smooth.  They are considered the treasures of Spectacle Island.  This treasure hunt however is not a hard one, just take a 15 minute stroll along the shore and you'll find beautiful beach glass of all shapes and colors. 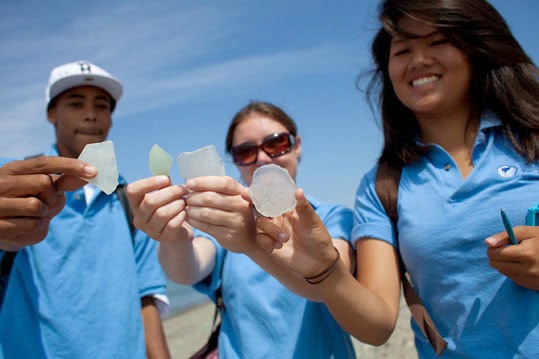 Today, Spectacle Island is ideal for hiking, swimming, boating, and leaning.  It's a fantastic destination for families and groups of all sizes.  Stop in at the  “green” visitor center with exhibits about the history and evolution of the island. With its many hiking trails, you can explore on your own and find yourself at the top of a drumlin within 20 minutes.  From there, you can take in the spectacular panoramic views of the city skyline and the other harbor islands.  The rangers on the island also provide frequent guided historical tours, as well as kayak excursions around the island.  Take time to enjoy the open fields, they're a great place to picnic and set up group activities like kickball, frisbee, or soccer. Down on the pier you can cast your rod into the harbor and try your hand at recreational fishing.  It's also a great place to find green crabs and skates!  After a long day of exploring, nothing feels better than cooling off with a quick swim in the harbor.  Although Spectacle's beach isn't a white sand beauty, a few quick steps over the pebbley shore brings great rewards with a refreshing plunge into the blue harbor waters.

Spectacle Island opens with the first ferry in May and closes on Columbus Day each year.  To plan your own trip, check out the links below for more info on ferry times and Save the Harbor/Save the Bay's All Access summer programs.
http://www.bostonharborislands.org/ferry-schedule-spring-fall
http://savetheharbor.org/
The possibilities are endless, you just have to get out there and start exploring!