Off to the Races!

Yesterday Camp Harbor View hosted their yearly Amazing Race. The campers and camp counseling staff raced through the course, making stops at designated race stations all over the island in search of the next clue that would aid them in their journeys. At some stations the groups were required to hold hands and form a large ring and then pass a hula-hoop around the ring without breaking the circle. At others they were instructed to create haiku poems and when given a series of three words, break apart each word in order to form an entirely new word. Upon completing the tasks the groups were then rewarded with a clue directing them to their next location. 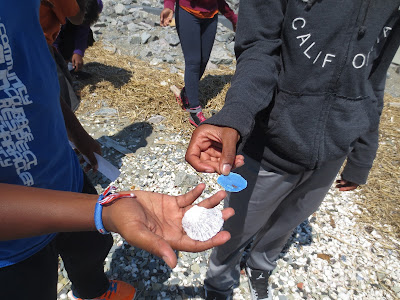 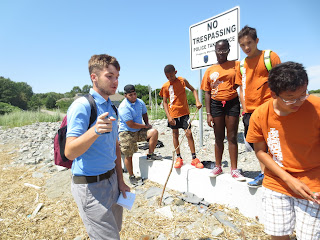 The Save the Harbor/Save the Bay crew had a station staged on the famous Shell Beach where the campers scoured the shore in search of various sea shells, washed up pieces of sea glass, and their favorite, expertly-placed mystical blue marbles. At first many were  discouraged by the task as the shore line seemed too flooded with infinitesimally small items to locate the ones they were looking for. They soon learned that with teamwork the task became tangible and were successfully able to locate the hidden pieces and move on with the next clue. 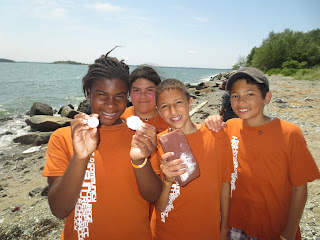