Once a kid, Always a kid

Today marked the first day of All Access Boston Harbor, where we interacted with a variety of different kids from all over the city and surrounding towns of Boston. I was a little bit nervous at first as to how the kids would react to me, but once they started to fill the pavilion, with their staff and the help of my co-workers, we bonded quite nicely. I met a lot of cool and interesting kids of all different ages who were excited about the voyage to the beautiful Spectacle Island to try something new. I felt like a kid again being around the groups, it was almost like reliving when I attended camp.  I saw a mirror image of the young Dexter Andrews in a lot of the children, which helped me to not only relate to and interact with them, but to be comfortable working with them and teaching them some of the things that I learned when I was in their shoes as an EXCITED and CURIOUS camper.


The heat of the sun beat on the pavilion and heated it like a sauna when the group of about four hundred young boys and girls arrived early Thursday morning. The Save Harbor All Access staff walked through the pavilion constantly talking to people, children, sponsors, parents & partners. I grabbed a chair and found a group of kids sitting by themselves, and I began to socialize and get to know each individual. By doing that, it broke the kids out of their comfort zone to allow them to become comfortable again. It led to a great day.

David preached frequently to try something new, something that you've never done before, and the past two days had been my first time visiting the islands!! The best part out of the experience was the second day; being more active than the day before, more vocal, more leadership, more of EVERYTHING! I gathered a group of young kindergarten kids and encouraged them play sports.  We ended up hiking behind the theory that once we reached the top we could play a variety of sports games.

A group of kids and the staff took off storming for the top of Spectacle Island , I almost did too until my senses brought me back to realize that there were three kids whose spirits were down. The first: crying with her feet drilled into the hot gravel path (Harmony), the second threw a temper tantrum because the other kids wouldn't share the ball with him (Kevin), and the third who seemed to be uninterested in playing with the other kids(Sasha). I just talked my way through the process of motivating each of them to pick up their energy and get involved. I've never dealt with 3 kindergarten kids all in crisis at once (doing something new-Dave)! I gave one the ball, cracked jokes to other and luckily I have a strong enough back because I carried two of them 90% of the way up to the top. By time we reached the top all of the kids were united and playing together, it was a good sight to see! Can you believe that!? A sight better than the highest point on the Boston Harbor! Yes indeed it was. 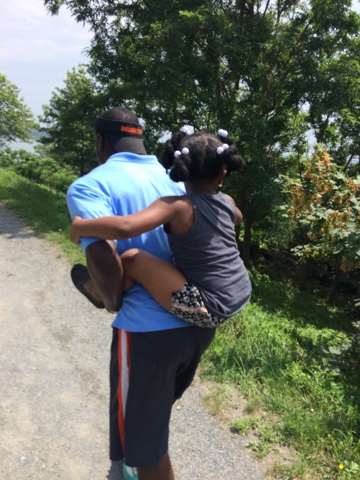 I felt like I really connected with those boys and girls in a way that almost brought tears to my eyes. Knowing that I was doing something that I enjoy doing, giving back to neighborhoods in the city/state of where I was born is unreal. To impact hundreds of lives of the youth is remarkable in the eyes of me and I pat my self as well as the rest of the Save The Harbor staff and our partners on the back for the excellent job they have done so far this summer. 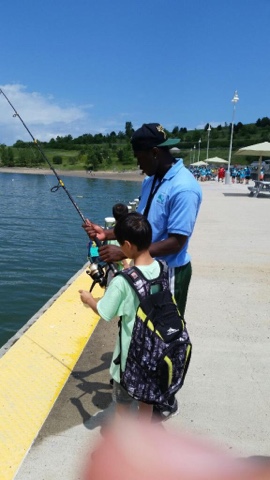 I taught a very curious and excited young gentlemen how to fish (depicted above). Although the young man faced hardships in his first fishing experience he rejected my assistance! With a supergrip on the fishing pole I almost spoke no language he could understand; behind his eagerness to reel in a fish. It's all good! It was a good time. That young man is an example of dedication to not give up on something considering it was his first time.!

Cheers to a excellent week of All Access and all the groups who have been apart of it. Thanks for the opportunity and I look forward to cherishing many more days like these. 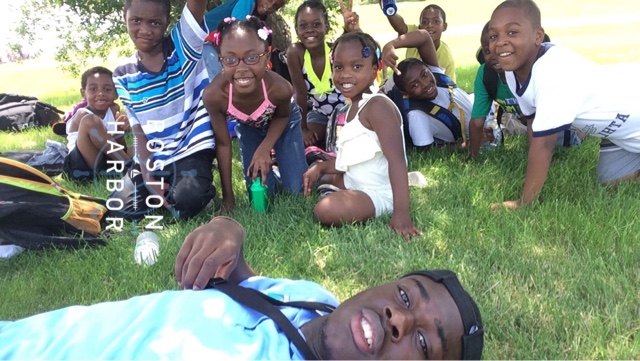