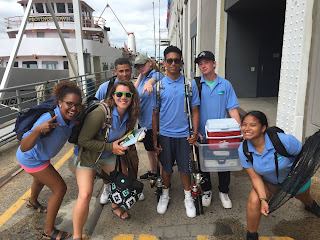 Last week while on Sceptical island we had two groups at sports with Carlos, Christian and me. One of the groups was from Dorchester the other was from Cambridge on the two days we had those groups we played a huge game of kickball. The first group we played with was the group from Dorchester all the the kids in that were hockey players and baseball players so everyone was an athlete so I knew it was going to be a good game. Christian and I were on the same team Carlos was on the other. The game started of awesome my team scored 4 runs in the 1stt inning then my pitcher got three straight outs to end the second half of the 1st inning. I was up 4th  in the 2nd with one out and runners on first and second and on my first pitcher I bombed an three run homer right over the outfielders head. On the way to home plate I decided It would be a good idea to try and flip so as I got closer I jumped and mid flip I started to turn sideways and I landed right on my left leg. My team ended up winning 10 to 4 it was a blow out. 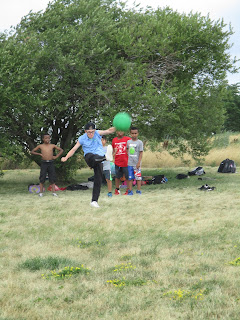 Now the group from Cambridge was coming to play it started to get so windy the ball would fly through the air it was so strong. We ended up losing the second game 5 to 3.The Cambridge groups counsellors were hilarious they were telling jokes and messing around with the kids.