I'm back, hey it's me D reporting now from Piers Park in East Boston. On that wonderful Friday I spent the day with some fantastic and happy kids. In the morning we gathered all the kids around and played a game of Museum and a fun game of Charades. The kids had to act out a sea turtle, jellyfish, and starfish, mostly things that live in the sea. Some were very easy to guess and some were hard, but watching the kids put their acting skills to use was very entertaining. In the afternoon we took all the kids down to the dock and we had fishing, kayaking, and two touch tanks going on. In the touch tanks we had red crabs, green crabs and a LARGE spider crab. They told me that's the biggest spider crab they had caught since they been at Piers Park this year. I was so happy because on the day I happened to be there they caught a big spider crab, and when I mean big I mean very BIG. I was so excited and mostly creeped out but I had a big smile on my face along with the kids. Toward the end of the day we played 2 games of Capture the Flag, which was two competitive games with 6-8 year olds believe it or not. It was really fun to play & watch. The kids also went to the park and got wet in the sprinklers and made a waterslide. This was a great week with STHSTB and a trip to Piers Park was a great way to end the week. 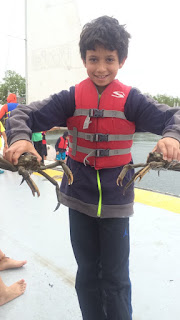