Hey guys, its Preston again. I had an amazing day today with the groups of kids that came to the beach. I played can jam, played a little football, and I even helped make a homeless shelter for hermit crabs. Yeah that's right, a homeless shelter for hermit crabs. Or, as I heard it called,a "sanctuary" for crabs! Joe and I helped them make a huge hole, that was then followed by an even bigger trail back to the shoreline. We left it up to the kids to go find hermit crabs, and periwinkles, to bring them to their new little home. Bucket after bucket, hermit crab after hermit crab. The shelter finally became a success. "We need more crabs" was the phrase of the day. Even fifteen crabs weren't enough for the determined children. They just needed more. Soon enough, there was more than one crab shelter on the beach. Each sanctuary (if you will) was filled with more and more crabs. You just can't beat playing in the sand with kids. Til next time, Preston. 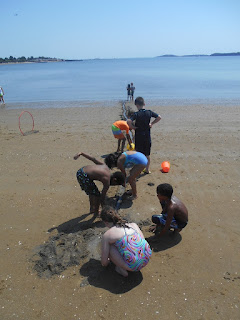 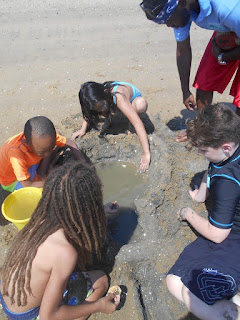