Creek Side, The New Inititative 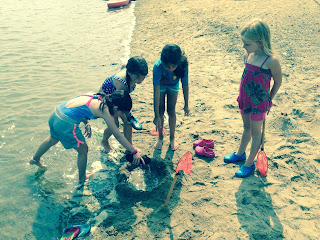 This year we are seeing rapid growth in our Quincy location, Blacks Creek. We can accredit that to numerous things but I like to believe it was part of having a quincy native, Danny O'Hara, working with us. Maybe even Carolyn's impeccable warm-up games but we cannot give her too much credit too early (Your Awesome, Carolyn.) Who knows, the point is the numbers are growing exponentially. We started off our first day of programming with nineteen children and the numbers have seen heights like never before. All these numbers just get me excited for our infamous Save the Harbor kickball games.

After our early monday rules ritual, an awesome new initiative part of our mornings thanks to Carolyn, we sought after the waters of Quincy. A few of the girls, Jocelyn, Mary-Kate, and more created their own little ecosystems. They created a colosseum styled environment where they captured species of their interests and relocated them to their own aquarium. It was amazing to watch their creativity first hand and the level of teamwork each omitted. They respectfully recreated a replica of what they saw as the "original" environment and even gave some of the hermit crabs cool names. Unfortunately "Smitty" was not one. I was hoping they would name the hermit crab smitty, thats a cool name. Shortly after our snacktime I led the children up the hill and introduced them to a good friend of mine. His name is Iron Boot.

Iron Boot is a three year all access kickball phenom, you'll hear more about him later in the week!