Farewell To Spectacle!.. But We'll Be Back.

Here is the All Access Boston Harbor crew's recap of day three of fishing on Spectacle Island:

After landing on the pier at Spectacle, the crew and I made some minor adjustments to our rigs. Having used a Carolina bottom rig for the past two days, we decided to try our luck using a drop loop drift rig (which holds the weight on a drop loop, as opposed to the three way swivel shown in the image.)

Unfortunately, we still had no luck with the fish.  But! Not to worry, we will be going out to George's Island next week and I am sure we will produce better results then.

Having this experience on Spectacle Island has been a privilege.  The All Access staff - Lindsay, Dan, Ahmed, Antonio, Ian, Drea, Dex and Andy have been wonderful to work with.  Whether its Dex carrying kids on his back, or Ahmed setting an example by allowing a wave to bowl him over on the beach, their efforts with the day campers - as recorded in their blog posts - have been truly exceptional.  I look forward to getting to know you guys better this summer (as well as anybody who may have been left out of that list.)

Meanwhile there is a cooler full of fresh bait that I picked up yesterday sitting in the office at this very instant!  If anyone has a direct line to the stripers or the flounders swimming off of George's Island, now would be a good time to give them a heads up that we are coming for 'em!  (Actually, if you are in contact with those fish, please don't say anything to them as we really need to start catching them - furthermore if you are in correspondence with any fish at all, I think it's time that you and I had a talk.)

Anyway, farewell to Spectacle for now.  You were a worthy adversary, but don't rest on your laurels yet.  All Access will be back later this summer and by then we will be seasoned and salty and set to catch your fish. 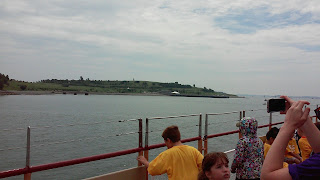