So this summer has been awesome so far. I met so many awesome kids. Just the other day I met a little boy and girl who were siblings they were visiting from New York. They were so much fun to hang out with. It turns out that the little boy had a pet fish back at home which he named Mr. fish. I also got to witness really little kids who were friends. I remember the little girl was playing with the crabs and her friends was on the side watching, so after she was done she went up and hugged him, which was so sweet. As they left and were walking in the childrens museum, one of them grabbed the other ones hand and they ended up holding hands, which was so sweet. I've always thought that little kids have the most compassion and love for people and animals. They are also quite funny. During our first week there was a little girl who was using a fishing rod that had a rubber fish for the bait so each time she pulled the line up she would always scream and say I caught one which was so funny but cute as well. The unfortunate thing was that we have not caught any fish yet, but i have a feeling we will catch some soon. Hope every ones having a great summer so far, and I cant wait to continue with the rest of my summer at save the harbor save the bay/ childrens museum. 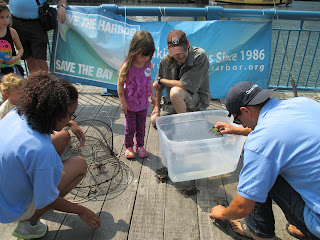 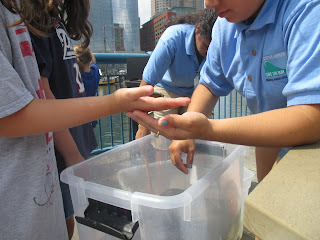