On Thursday, down at Boston Children's Museum we uncovered an interesting crab. It was very different from the green crabs and spider crabs we had been pulling up. Being the good team of naturalists we are, we keyed it out in my Audubon Field Guide. The result: A Purple Spotted Shore crab. Fantastic! Except there was one problem; the range of the purple shore crab is Alaska to Baja California. We brought the issue to Bruce, along with a fifth of a specimen (a fun looking claw). He suggested we do some research, after telling us a long and weaving tale of snails and Cuban Afro-Carribean rituals (if you want to know the whole thing, you'll have to ask him yourself).

Being inspired by Bruce's story, I started some research. I began with the question of how a purple shore crab found it's way to Boston Harbor. Here's my preliminary findings....

As Bruce said, it is not the purple spotted shore crab. Besides the fact that the range is way off, Purple Shore crabs prefer rocky outcrops and are rarely found in water over three feet. We were crabbing in eight to fifteen foot sandy/muddy bottoms. However, Boston does have a purple crab, very similar in size, shape and character , as the purple shore crab. Drum roll please.....

The purple marsh crab looks very similar to the shore crab. One problem: they live in salt marshes and eat cordgrass. At this point, I hit a wall and ran into some rather interesting evidence regarding our invasive friends, the green crabs.

When people hear invasive they hear "bad" "hurt" "kill" "hulk smash". The word invasive even has a sinister sound to it. Well, our GREEN CRAB is playing an IMPORTANT ROLE in keeping the Massachusetts Bay salt marshes SUSTAINABLE!

How is that Mike?

The story begins in Cape Cod in the 1930's. Due to increased mosquito populations, humans began digging mosquito ditches in salt marshes to drain the water, in turn driving away the mosquitos. But like so many human disturbances, there were unforeseen consequences. These ditches created a perfect home for cordgrass, a low growing marsh grass now abundant in Mass Bay salt marshes. O.K Mike, we get it, you like plants, so what?

Then, three years ago, cord grass began coming back.

Ecologists and marine biologists at Brown University noticed this and scratched their heads. Why is cord grass coming back, they asked? One researchers hypothesized that green crabs, a species known for their aggressive, predatory behavior as well as their adaptability, could be keeping the purple marsh crab's population in check. Now, green crabs don't usually live in salt marshes because they prefer small rocky outcrops to hide under, however, with such an overabundance of marsh crabs it appears they couldn't resist. After monitoring the level of green crabs, marsh crabs, and cord grass in ten salt marshes, and running lab tests to see if green crabs would in fact eat purple crabs, they concluded that green crabs must be keeping the population of marsh crabs in check, allowing cord grass to regrow.

So what does this long post have to do with us?

We catch mostly green crabs due to our location, however Boston used to be covered in salt marshes up and down the coast. Though we have lost about 81% of them since pre-colonial times, some still remain, and not too far from the children's museum (there are some at Piers Park).

This is where my inquiry hit a small hurdle. Why would a purple marsh crab be out of a salt marsh (though near one) swimming with a group of its known predators?

Reading about nature is no where near as fun as investigating oneself, so this coming weekend I will be taking a trip to some of Boston's salt marshes, and doing some crabbing to see what I find. I will also be investigating salt marshes close to the children's museum. Lastly, I will be searching out people who know about crabs and asking them questions.

Any hypothesis, additions or comments? I am sending out a call for help to figure out the mystery of the marsh crab! 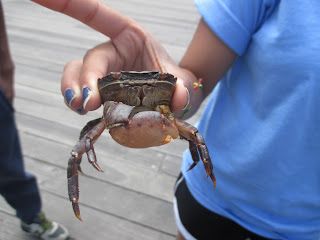