Working at Camp Harbor View has been amazing. Every morning I get to ride a ferry to work, upon which I indulge in breakfast and board games, mainly playing unsuspecting victims in chess. Although it's traditionally a game played by two opponents facing off against one another, these morning games have developed into community efforts with onlookers continually offering up move suggestions. 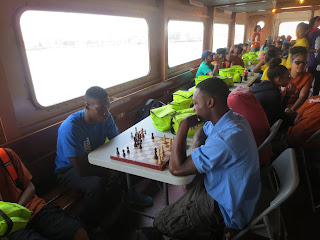 On Wednesday the campers got a chance to explore one of the beaches located on Long Island. Here they learned about native and invasive crab species, and also how to determine their sexes. Then they were instructed to scour the beach in search of both man-made and natural objects and then to create a tale that explains the different items they found. My favorite story was one told by a girl that had found burnt cinder and described it as a meteorite that had crashed down on the island and created the very landscape existing there today. 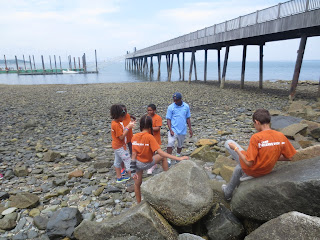