Marine Life on the Harbor

This was our first full week at the Save the Harbor sites, and we were busy! On Monday, we started the day at Courageous Sailing Center, where we pulled up some lobster traps and took a look at what was inside. We caught our first lobster, and the kids were very excited to hold the lobster and get a closer look. We made sure to put rubber bands on its claws before we took it out to show the kids. We also caught several green crabs, a rock crab, some starfish, and two tiny fish. The kids spent a lot of time looking through the lobster trap to see what we caught, naming the animals, and taking pictures of them. 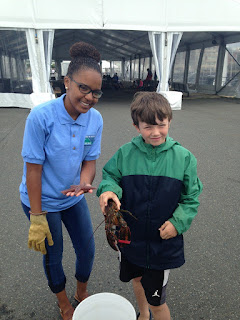 Holding a lobster and starfish that we caught in the trap

Later that day, we went to Community Boating on the Esplanade. Here, we help out with an environmental science class, where students learn about the history of the harbor and how we can keep the Charles River clean and healthy. After talking with the students about the harbor and the river, we went out to the lagoon to go fishing. At the end of the day, I saw a kid catch a fish for the first time! It was a great reward to have caught a fish after spending so much time fishing over the past week and not catching anything. He caught a small sunfish. 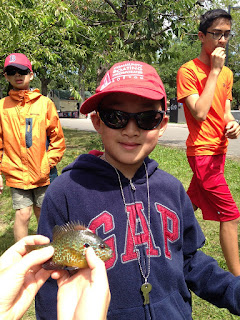 Our first catch at Community Boating!

On Tuesday at Community Boating, we talked to the kids about the history of the Harbor Islands, and many didn’t know that at one point, Spectacle Island was used as a landfill for trash. We also talked about how long different types of trash (paper, aluminum, plastic, and Styrofoam) take to decompose and about the importance of recycling. To finish the afternoon, we went kayaking in the lagoons along the Charles River, and we found a baby painted turtle sitting on a lily pad. We also told the kids to keep an eye out for trash, and are planning to do a trash-pickup in the river next time we go kayaking.

On Wednesday, I went to Carson Beach, and I had a ton of fun playing with campers on the beach. When the tide was low, the kids and I had a great time looking for snails and hermit crabs in the ocean. The kids engineered a tide pool and waterway to house the animals they caught. Overall, it was a great day, and we were all excited to get a closer look at the wildlife at Carson Beach.