Yesterday, I did something I have never done before. For all of these past three summers here working for Save the Harbor/Save the Bay, I have never been to Courageous Sailing Center out in Charlestown until yesterday. When I got off at North Station, I got lost walking as I was following my GPS because it was directing me to the longer way. Somehow, I ended up finding my way there after 10 minutes of being lost. When I got there, Neiomi, Abdi, Sam, Grace and myself helped out the kids with some fishing. After we got them set up with fishing, Grace went down the dock to pull up a lobster trap and I ran down the dock as soon as I learned she was there because lobster traps are my favorite. I helped her pull up the lobster trap and we found a little lobster along with a few crabs and a starfish. I had no idea we had lobster traps out there so when I put the lobster, crabs and starfish in the bucket, I brought it to the kids and that is when they all got distracted from their fishing rods. The lobster that we caught was female and somehow the kids ended up naming her after our Save the Harbor staff, Sam. It was the funniest thing ever because all of the kids started yelling "Sam we named the lobster after you" and Sam's response was "awe, I feel so loved". A few minutes later, the kids ended up releasing the lobster and went back about their fishing rods.

Later on, Grace and I took a different group of kids down the dock to pull up another lobster trap. This time we didn't find any lobster but we found a very tiny eel and a couple of smaller starfish.The kids were so into the lobster trap to see what else they would find in it. This was our second lobster trap. After that we moved on to our THIRD lobster trap that was not pulled up in a while and this is when I had to face some challenges. The lobster trap was EXTREMELY HEAVY. I was not able to pull it up by myself so with the help of Grace, and two counselors, we were able to pull it up. The lobster trap and the rope itself was all covered with sea squirts and mussels and inside the lobster trap was a massive amount of black and moisty mud which was another reason why the trap was really heavy. As I opened the trap, there we a few crabs that were covered in mud and It stank really bad. A few kids helped me remove some of the mussels from the trap and the sea squirts as well in which they found really fun to squirt each other with. Cleaning up the trap and taking all that mud out was the hardest part so when I put on the gloves, that was when the real work started. It took quite some time for me to clean up the trap and the dock because it was also covered in black mood. I grabbed one of our white buckets and started throwing water on the dock and the trap to remove most of the mud. After a while, I was able to clean up the trap and throwing it back into the ocean. As soon as I looked at my jeans, I was not too happy because it was wet and covered in mud which means I had to go buy a new pair of jeans and throw the one I had on away. I can tell you guys for sure that pulling up that last lobster trap and cleaning it up was a workout for me. This was how I got my "MVP for the day" title from Grace and Neiomi. Although it was a tough Monday, I was glad that I was able to clean up the trap. Overall, the experience at Courageous was not as bad as I thought it would be. 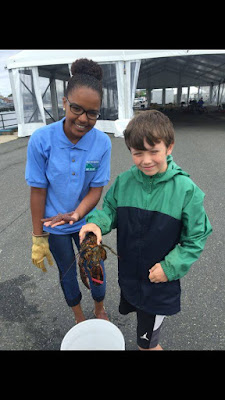