This week on AABH we made our maiden voyage out to Spectacle Island. One of the first activates we begin once we get off the boat is setting up the crab traps. As Kharliyah and Andrea were going to bait and throw the crab traps in they saw some thing very interesting…one of our crab traps from last summer! Andrea quickly called me over to help pull the trap up. The line was slimy and smelly and the trap itself weighed a ton. When we finally pulled it to the pier it was covered in tunicates. Tunicates are also called sea squirts because they will squirt out water when you touch them. Hidden inside our tunicate treasure were a few more creatures. We had three rock gunnel, two of which managed to push themselves off the side of the pier before we could get them in a bucket of water. The best part of the trap was all the spider crabs left inside. 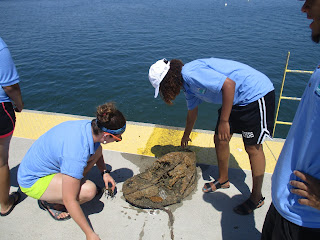 I think spider crabs are one of the coolest animals you can catch in Boston Harbor. They are truly a very unique crab with a very special adaptation. Spider crabs have a glue like spit that they stick all over their body. Algae grow all over the crab’s body as a form of camouflage. It was fun teaching kids as they got off the boat about the spider crab; really cool way to start the day! 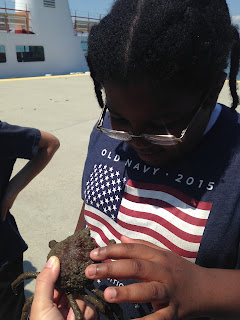 The other half of my day I spent up in the saddle playing kickball with a group from the East Boston YMCA. There was one girl on my team who did not know how to play the game and would get upset when she did not hit the ball foul or get out. We explained the rules to her and were all good sportsmen and let her kick multiple times until she got the feel for the game. By the end she had a couple of good kicks in. 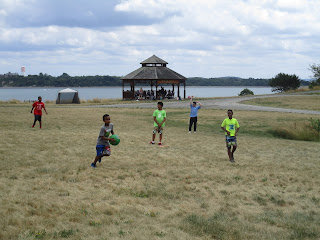 Spectacle does not offer much in shade but you can swim there! Even though I only dipped my toes, it was great to see everyone celebrate our first day on Spectacle with a cold plunge into the water!

Looking forward to my next few days at Spectacle!