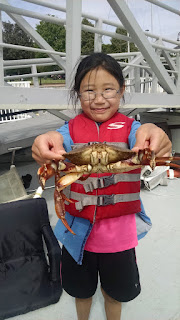 'The Ew Factor' is a term coined by our boss, Bruce Berman. He's never explicitly defined it for us, but from the knowledge I've collected, I'd loosely define it as something that we naturally think as gross and disgusting, but only because we haven't experienced it a lot. It's something that makes us say, "ew!," but once having handled it enough, the disgusting qualities lessen and we begin to see the really cool qualities that it possesses. These things are slimy, sticky, mucky, and mysterious, and they're something that myself and the rest of the Save the Harbor staff are supposed to introduce to our young Harbor Explorers. Luckily for us, the ocean is filled with these bizarre objects!

Even before we drop lines into the water, we experience 'the ew factor' that is bait. Bait is what we use to try to catch fish and crabs with, and it is usually pretty repulsive. My team at Piers Park encountered 'the ew factor' for ourselves on the first day of the program, when we had to filet a mackerel to use as bait. None of us had ever done this before, and we were all a bit hesitant to try it out. Before the day was over, two people on our staff had filleted their first fishes and by the end of the week, four of us had. It was a pretty gnarly experience, but now I'm comfortable with the process and am excited to have learned a new skill! Next time I catch dinner with friends or family, I'll be able to impress with my prep expertise! 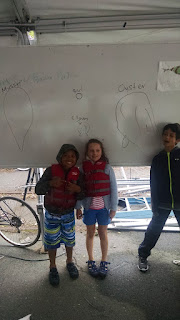 The other sea life that we've been using as bait are mussels. Mussels are shellfish, and unlike the mackerel, they aren't given to us by our overseers. Instead, we must hunt for them ourselves. We've been finding these mollusks under the dock that we fish off of. Finding mussels is easy, but once again, 'the ew factor' is something that we have to overcome. Us counselors must blindly reach under the pier and feel our way around for our bait. The thing is, there isn't only mussels living under this dock, but a number of different species that I'm unsure of.  We's rubbing our hands over all sorts of slimy creatures that we can't see, and it can be spine-chilling! We've pulled up full grown sea worms with our mussel hauls, which we also used as bait, and many different types of seaweed and tunicates, and other small, squirming creatures that I can't identify. Now that I've done it enough and conquered this 'ew factor', I think its awesome, and I'm excited to see what else we might pull up from under the depths. We've discovered something new and cool everyday, and I'm excited for the exploration to continue.


Just as the staff has mastered 'the ew factor,' so have our young learners. Some children who were afraid to touch a crab on Tuesday were holding giant red crabs by Friday. Other's who were tentative to touch fish were begging to hold more by the end of the week. When before they were grossed out by mussel meat, eventually they were running it through their fingers in analysis, looking for pearls (especially after our lesson on shellfish). Being on the harbor is so much fun, and I'm having a great time helping our Explorers become comfortable with harbor life.
-SEAN 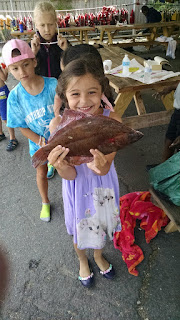 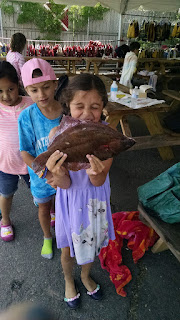