The key to a perfect day is to not expect perfection. Wednesday on AABH we had a group of nearly four hundred kids and staff. Getting off of the Provincetown II took quite some time but once we were on the island the fun began almost instantly. We pulled up the crab traps before all of the groups were even off the boat, that way the kids could see what we had caught before they began their day. When we pulled it up even we were in for a surprise. Instead of green crabs like usual we caught some rather large Jonah crabs. We even caught a small fish! As the day went on though we began to get hotter and hotter. With temperatures reaching nearly 90 degrees we set off to the water in the hopes off cooling down. The swim was fun until a crab pinched my toe! 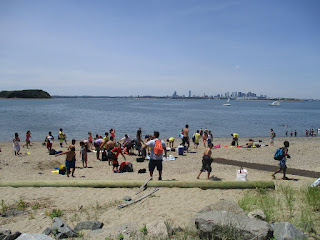 The next day we had a smaller sized group but still a great one! Many of the kids were excited to fish. Thursday, when we pulled up the trap we didn't have any Jonah crabs but we did have a lobster and a spider crab! Later in the day we could see the dark clouds moving in over the city. The fog got so thick we couldn't see the buildings! We were all trying to guess if the rain was moving towards us, which it didn't! The storms skipped over us (it did rain but only for about two minutes). On the boat ride home I was hanging out with some kids from the Y who thought I had magic powers. I showed them this game I played in elementary school where you use somebody's hand to guess their number. Obviously there is no true correlation but I kept guessing the right numbers and they got so freaked out! "How can you see a number?! I can't see it! Let me try!". Eventually I felt bad and told them I was just a lucky guesser but I'm not sure the were 100% convinced. So while the heat drove us to the water and the storms drove us to the boat, our days were still perfect.
-Sam
at 6:43 PM