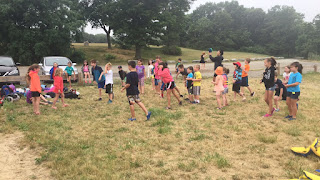 Reporting from Blacks Creek and a successful first week with all the kids. Day one was kind of tough because it was raining and we only had three kids but at the end of that day Meg, Lucy, and Joseph didn't want to leave and go home. Day two was so great because we went from three kids to thirty three kids and it was also very hot outside so we spent some time in the water catching Hermit Crabs, Minnows, Crabs, and even slimy snails. We also had a great game of kickball my team vs Edward's team and of course my team won because I'm an awesome coach and a pro at kick ball. Just the look on the kids faces when they run to home plate just puts a big smile on my face and another point on the check board. Day three was also another fun day because even though it was a little chilly outside we kept the kids busy and active by playing games like Red Light Green Light, Simon Says, and even the boys favorite game taps and football. We also had some of the kids color and the coloring pages came out so great that everyone took them home. There were a lot of faces that I have seen before from last year that came back to Blacks Creeks for this summer, which is a good thing because that means we are doing a good job and making sure the kids are having fun at all times.