Hey Guys,
One of the things that the kids beg me to do is to take them out on Kayaks. The kids love to paddle and love to be on the harbor. They constantly ask multiple questions, some of which are unanswerable. But the one thing that these kids love to do is to clean up the trash that is in the harbor. I will be paddling the kids back to the dock and I hear one of them yell "TRASH!" and suddenly the four kids that are in the kayak with me are overpowering my paddle and turning us around trying to get all of the trash that they can. Because at Piers Park they are called the Harbor Explorers, one brilliant young girl named Sophia exclaimed that they were not the Harbor Explorers, but they were the Harbor Cleaners. 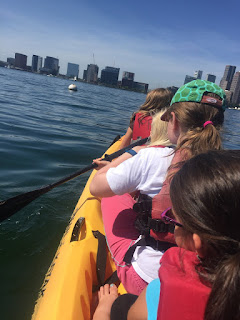 It was even more amazing because on the Kayak, we had gone into a corner with a lot of trash, and one of the girls said something which really touched my heart. She stated that it does not make any sense that people throw the trash into the harbor because it makes it dirty and it is not good for the environment. It's really inspirational to me that at such a young age, these kids are more aware of the environmental impact of trash, and are more inspired to do something about it than a lot of other people in this world.
Amanda
at 5:31 PM